Shop with a Cop -

The Camano Law Enforcement Support Foundation sponsored the program in 2017 to provide for some children from Camano Island to go Christmas shopping with an Island County deputy.    Building on last year’s success of taking eight children Christmas shopping, the Camano Precinct is hoping to increase the number of children participating in the program.  Deputy Bill Vaughn is heading up the program, working with both Camano elementary schools and his fellow deputies, said Earl Barnard, Treasurer of Camano Law Enforcement Support Foundation, a nonprofit organization, which is providing the funds.

“The Camano Law Enforcement Support Foundation has pledged $1600,” Barnard said in a press release.  With those designated funds, the deputies will take at least eight students shopping with a budget of $200 each.  “We will have four students from each Camano Island school,” Barnard said. A local Camano Island resident, whose name remains anonymous, donated a sum of $200.00 for this good cause will add another student to be chosen by Deputy Bill Vaughn.

“It’s a fantastic opportunity for law enforcement to connect with the kids in the community we serve,” Deputy Bill Vaughn said.  The children are selected by the schools and the names are given to Deputy Vaughn.   He will give the children’s names to the deputies and will leave it up to them to arrange the shopping excursion.  The deputies will be off duty, but they will be in uniform and will drive a patrol car.  “It’s up to the parents to decide where to go shopping,”

Barnard said the organizers are hoping the children will shop for their family members, too, not just for themselves.

After last year’s success, the Foundation decided to seek additional funds from the community so more children could be included.

“If additional funds are donated by the public, the number of kids participating will increase,” Barnard said.

Donations may be made here or for more information contact Earl Barnard 360-387-9670 or earlmo38ci@frontier.com

Stanwood Camano News article about 2018 Shop With A Cop. 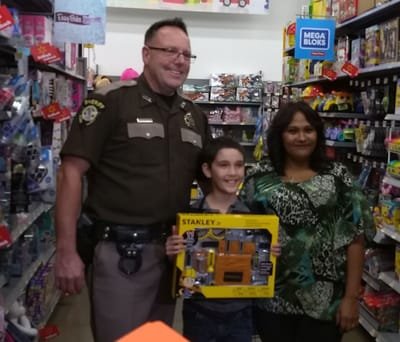